The great business of Agbar with water in Barcelona

Moreover, they also have earned…
76.4 million euros for keeping and renting water meters, which we have already been paying with the costs revealed by the company MUSA-Aquology.
4.1 million euros from fines and new connections for families that suffered cuts in water supply because they could not pay the bills .

What do we pay with the water bill?

Around 56% of the costs included in the tariff charged by Agbar are not directly related to the water service.

Where does the money we pay through the water tariff go?

Agbar has been managing the water in Barcelona for 150 years. Until 2014, the profits that they reported were much lower than those declared after the creation of the joint venture. 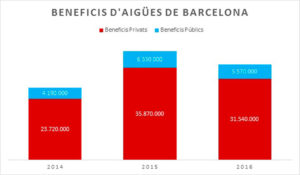 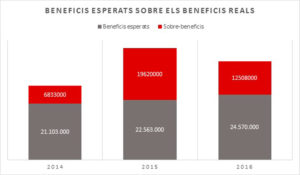 With the creation of the joint venture, Agbar established that it would make profit from water management. So far, these profits have exceeded the expected amount in 60%.

Has Agbar earned even greater benefit than what it has declared throughout these 150 years of operation?

Make sure this account has posts available on instagram.com.